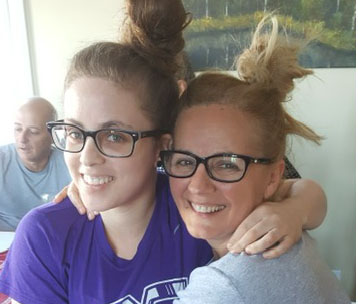 As we come to the end of our Pride Month celebration, we offer you one last employee profile. This time, it is not of an LGBTQ2+ individual, but one who is in fact the proud parent of someone who identifies as such. The person in question is our very own COO, Lisa DiMarco, who has graciously agreed to share some of her story with us on this, her last week at Media Experts.

Lisa’s journey with Media Experts started 35 years ago, when after having two children back-to-back, she found herself ready, though not without some shards of guilt, to get back into the workforce. With considerable experience at a full-service industry under her belt, her application for a secretarial position was immediately put atop the overqualified pile, but eventually found its way into the hands of Mark Sherman, Media Experts’ founder, who hired her almost as quickly as he told her that she knew nothing of media, but that he would be there to teach her.

Today as COO, she likens her position to an octopus, having a hand in all the things that no one else has the time for on the backend, but that are just as important as the front end. Her attention and vision for Media Experts’ operations, HR and communications have made the agency what it is today, a nimble entity that continuously works to evolve its products and offerings- and she says she enjoyed every single moment of it, good and bad.

“There are too many good memories to count. I loved all of it. Every new hire, new client…even the hardest times were the best of times. That’s where you saw your colleagues step up for you. I remember so many times where Flavia, Mary, Patty R, Vasso stayed and worked with me into the night, because in those days you couldn’t go and work from home. We’d laugh, cry, work together. I’ll never forget it.”

While her career has been a fast paced and demanding one, she confesses that her true happiness is found when she is with her family, and all is in harmony. Her children and grandchildren being the most important thing in her life, she admits that when her youngest daughter, Carina, began her coming out journey, it was not an easy time for either of them. Having to confront and leave behind some preconceived ideas she had of the life she wanted for her daughter, she wishes that her reaction at the time would have come from a place of support, rather than fear. “While it didn’t take me that long to come around, I often reflect on the grief that I caused her, which could have been avoided. In that moment, my instinct as a parent was to protect her and I was afraid of what people might say, how people might hurt her. I quickly realized I had to let go and find other ways to care for and protect her. And most importantly, I don’t want her to be anyone but who she is. She is kind, perseverant…I never stop learning from her”

When asked if she would give any advice to parents dealing with a child who is coming out, Lisa says she would recommend starting to have conversations around LGBTQ2+ issues early on, so that it is always on the table, and that children don’t get ideas of what is normal and what is outside of normal from other sources. “My grandkids have an aunt who has a girlfriend who is also their aunt. It’s always been this way for them, it’s not even a question of if it’s “normal” or not. That’s the type of change I’d like to see in the world.”

While she feels lucky that her daughter and family live in Canada, where LGBTQ2+ rights are protected, she believes there is still a long way to go in fighting prejudice in our communities and massive injustices around the world. “I was always open to other people, other cultures. Growing up in Parc X, diversity was everywhere I looked. I loved going to people’s houses and seeing how they lived differently from us. My reaction was never fear or judgement, it was to embrace and immerse myself. I think if more people took that mindset authentically and banded together, we would see more significant change”.

Officially retiring at the end of June, Lisa says she is looking forward to spending more time with her family, hosting dinners, taking care of her five grandchildren, and maybe even finding a moment to relax. “We are the house where the door is always open. It’s loud, it’s chaotic, but I wouldn’t change it for the world.”

We feel the same way about you, Lisa.